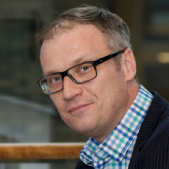 Professor Andrei K. Yudin is a Tier I Canada Research Chair in Medicine by Design at the University of Toronto. He obtained his B.Sc. degree at the Moscow State University in 1992 and his Ph.D. degree at the University of Southern California under the direction of Professors G. K. Surya Prakash and George A. Olah in 1996. He subsequently took up a postdoctoral position in the laboratory of Professor K. Barry Sharpless at the Scripps Research Institute. In 1998, he started his independent career at the University of Toronto. He received early tenure, becoming an Associate Professor in 2002, and received an early promotion to the rank of a Full Professor in 2007. He currently serves as an Associate Editor for Chemical Science, handling submissions in the area of organic chemistry.